Foreword to Your Unique Self
by Ken Wilber

Dr. Marc Gafni’s integral unique self teaching is seminal. What you hold in your hands is a radically exciting and groundbreaking book that will change forever not only how you think about enlightenment, but how you understand, from a post-metaphysical perspective, the very nature of human life itself.

The Unique Self work is magnificent, and it belongs among the “great books.” It offers what may arguably be one of the most significant contemporary evolutions of enlightenment teaching. Unique Self brings together East and West in a higher integral embrace of stunning implications. Unique Self is a pivotal step toward an authentic Integral Enlightenment.

The teaching in this book has been evolved primarily by Marc Gafni for over three decades and draws from his own realization, insight, and the enlightenment lineage in which he stands. In Gafni’s reading of this lineage, brilliantly articulated in his three-volume opus Unique Self and Non-Dual Humanism, (forthcoming) which I read in several highly excited nights, Unique Self is a non-dual realization of Unique Perspective. This realization expresses itself both as the Unique Perspective on a text and as the Unique Perspective of the realized individual—what Gafni terms, in Lainer’s thought, the Judah Archetype, whose perspective is a unique incarnation of unmediated divinity and therefore overrides all previous text, including even the Torah itself. In essence, the realized individual, whose True Self has been disclosed, expresses that True Self through his or her Unique Perspective—what Gafni originally termed “Unique Self.” Hence, what Gafni calls the non-dual humanism of Unique Self is rooted in this equation, in my wording: True Self + Perspective = Unique Self. 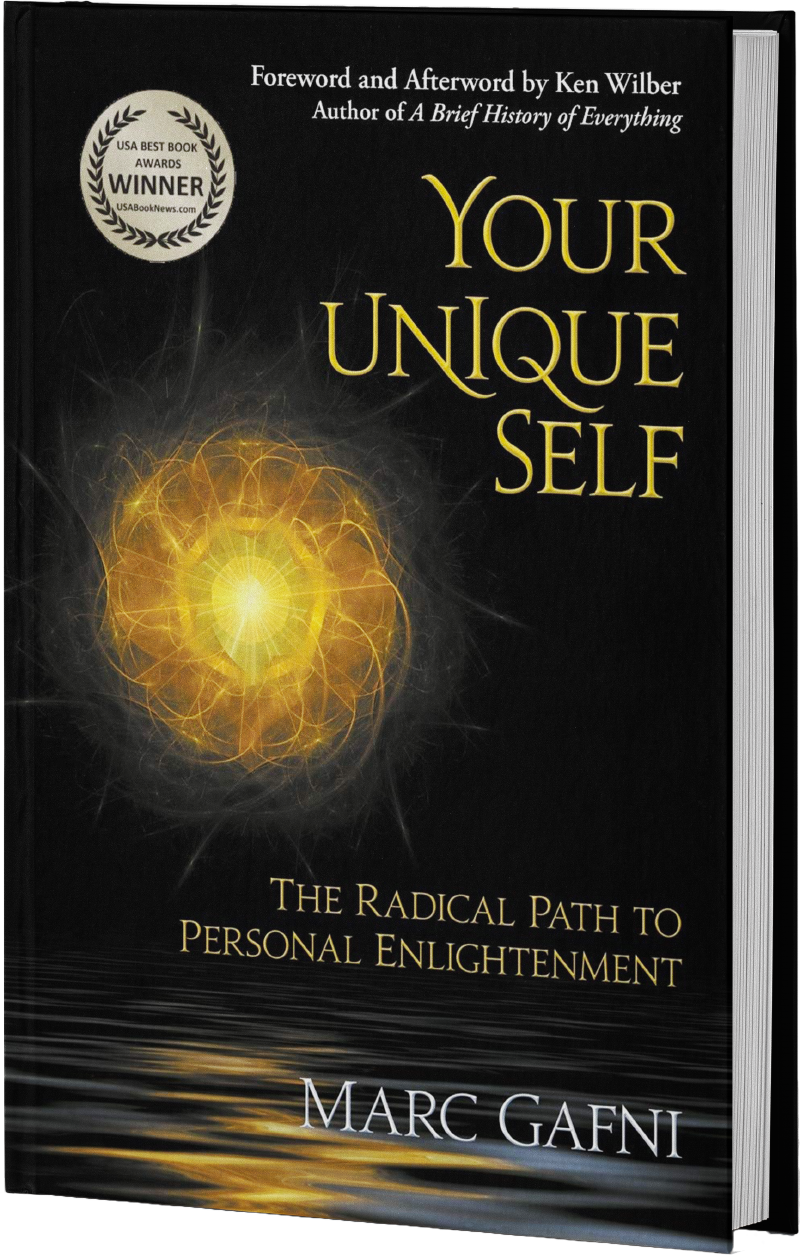 Unique Self brilliantly articulates the idea that within each of us is a post-egoic nondual realization of unique perspective, a unique incarnation of unmediated divinity.  The Unique Self re-inhabits all the natural capacities of the human body-mind and all its multiple intelligences. It embraces its capacity for math, for music, for introspection, for love and interpersonal connection—all the talents and capacities given to human beings—without dismissing the True Self, the One Spirit condition that connects us all. Unique Self drenches and permeates the entire system of what is known as Eastern and Western forms of enlightenment.

The full crystallization of this New Enlightenment/Unique Self teaching that Dr. Gafni initiated, in which he and I have partnered,  emerged through a  series  of many  important  dialogues  that  we had  over  nearly  a  decade. Through these dialogues, a highly  significant  new chapter in Integral Theory has emerged. These conversations were coupled with intensive discourse that Marc and I had with other leading Integral Spiritual teachers and thinkers, including, initially, Diane Hamilton in a catalytic role and later Sally Kempton. Over the last decade, Marc has dialogued with many of today’s most renowned spiritual theorists in the Unique Self-enlightenment, World Spirituality and future-of-love conversations, both public and private. This  includes important  dialogues with Brother David Steindl-Rast, Jean Houston, Bryon Katie, Michael Lerner, Susanne Cook-Greuter, Deepak Chopra, Alex Grey, John Welwood, Mariana Caplan, Warren Farrell, Michael Zimme, Terry Patten, Patrick Sweeney, Genpo Roshi, Michael Murphy, Arjuna Ardagh, Fred Kofman, John Mackey, Joan Borysenko, Lama Surya Das, Michael Bernard Beckwith, Tami Simon, Dustin DiPerna, Zachary Stein, John Gray, Warren Farrell, Don Beck, and many others.

Ken Wilber is the most influential figure in defining the terms of discussion on what constitutes the “Integral” perspective today. His corpus of 25 widely translated books has erected an intellectual framework for understanding the nature of converging trends in philosophy, psychology, sociology, and other disciplines. His books have often been bestsellers, and his scholarly books have been the basis for numerous academic programs, master’s and doctoral dissertations. He is a leading voice in support of World Spirituality based on Integral principles and has been one of the founding members of the Wisdom Council of the Center for World Spirituality.